International Spiritual Congregation was held in vast playgrounds adjacent to Jamia Al-Minhaj on the intervening night of August 15 and 16. The programme was organized to mark Layla-tul-Qadr in the 22nd Itikaf City 2012 under the banner of Minhaj-ul-Quran International. Hundreds of thousands of people attended the mega event of MQI in addition to hundreds of women for whom separate seating arrangements were made. 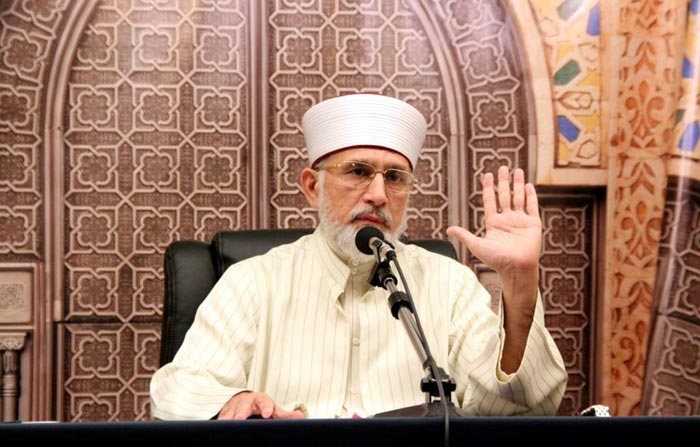 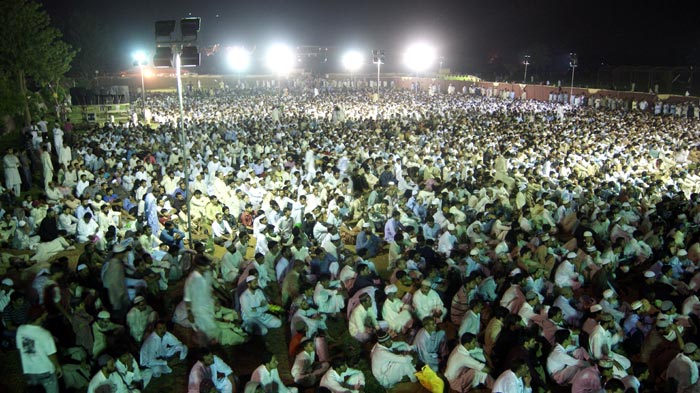 The first session of the program got underway with recitation of the Holy Quran by Qari Khalid Hameed at 10:30 p.m. The hundreds of thousands of people offered Salat-ul-Tasbih at 11:30 p.m. 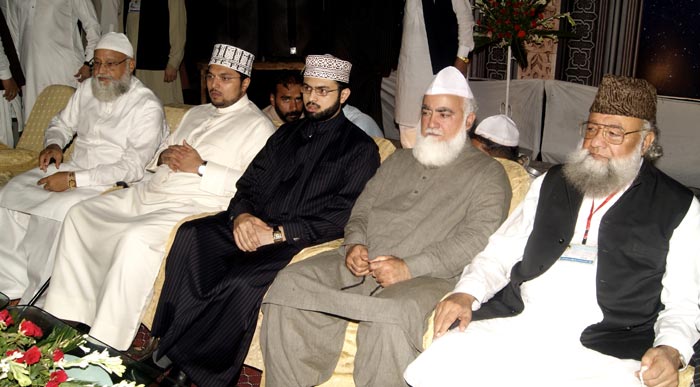 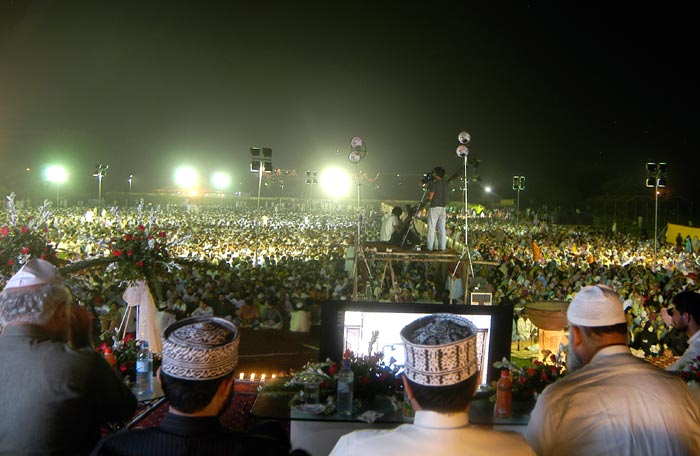 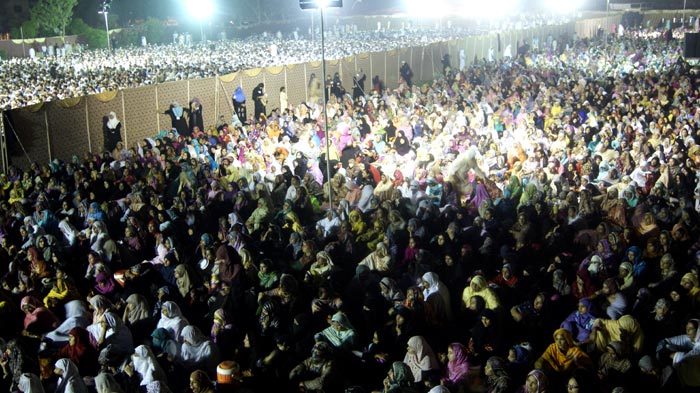 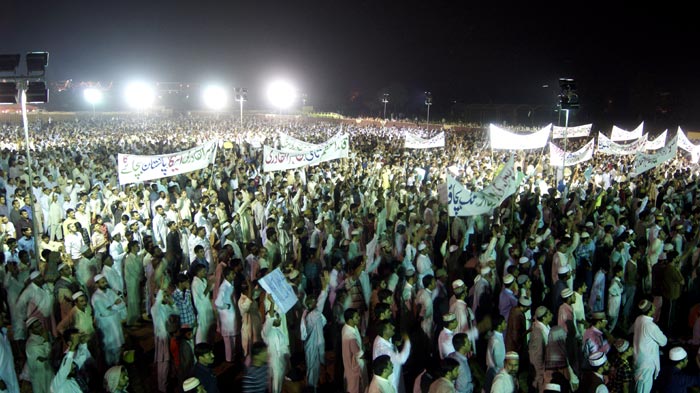 The second session of the programme started at 12 a.m., which was telecast live by QTV as well as Minhaj.TV. Hamdami Brothers, Shahzad Brothers, Minhaj Naat Council, Qari Anser Ali Qadri and Muhammad Afzal Noshahi had the honour of reciting Naat.

International Spiritual Congregation, which has been exclusive highlight of Itikaf City each year, has become a source of reviving spiritual values. He said that it had always been a matter of immense pleasure for him to attend these gatherings. He said that he was satisfied with MQI and its leader Shaykh-ul-Islam Dr Muhammad Tahir-ul-Qadri for their contribution to uphold the cause of Islam. He said that Dr Tahir-ul-Qadri was a great asset of the Muslim Umma. He prayed to Allah Almighty to enable his sons to advance the mission of their respected father. 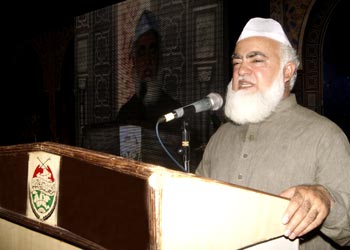 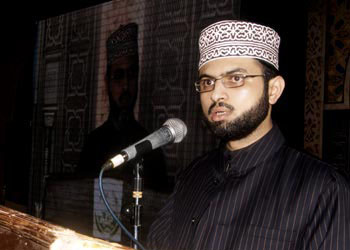 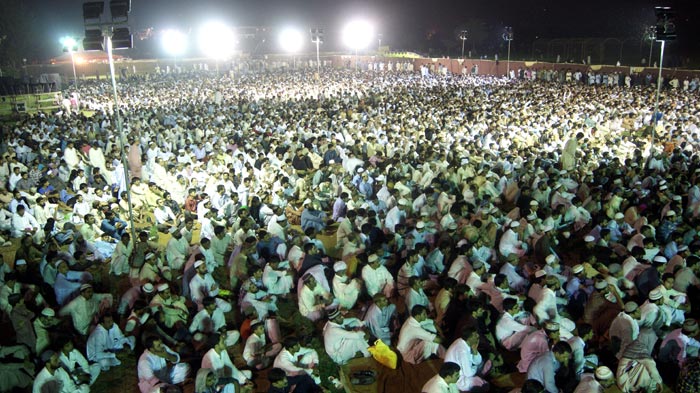 Speaking on the occasion, Sahibzada Dr Hassan Mohi-ud-Din Qadri said that the 27th of Ramadan was a night of repentance. This was the night to shed tears and win pleasure of Almighty Allah. He said that Allah likes those who repent of their sins and vows to make a fresh beginning in life. He said that those who do penance, His mercy comes rushing to them. He said that the Muslim world was facing decline but added in the same context that Allah Almighty would enable it to come out of its raging crises through MQI and Shaykh-ul-Islam Dr Muhammad Tahir-ul-Qadri. 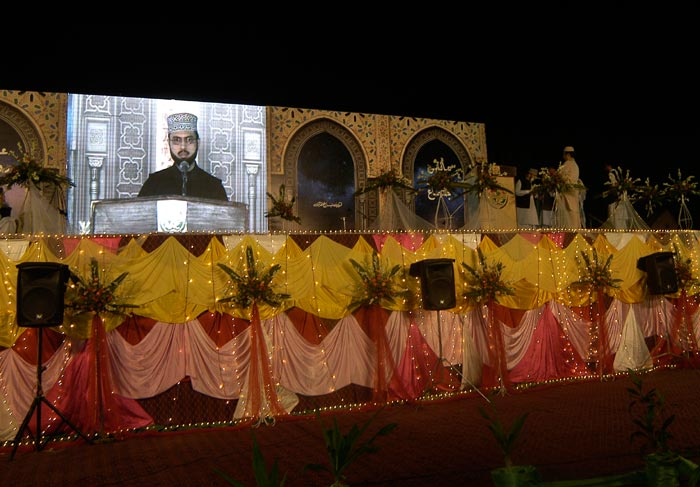 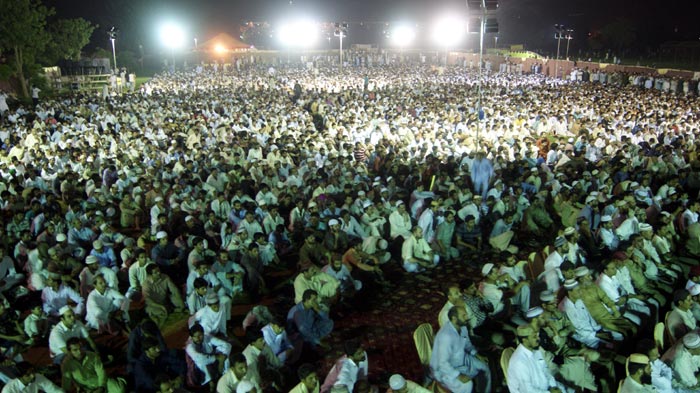 Shaykh-ul-Islam Dr Muhammad Tahir-ul-Qadri said that his soul is in Pakistan and he looked forward to meeting the people of Pakistan very soon. He said that he would offer a practical solution to the country’s pressing problems, adding that protection of the country’s sovereignty, restoration of national institutions and the Constitution of Pakistan and smile on the faces of the poor and less privileged sections of society figured prominently on his agenda. 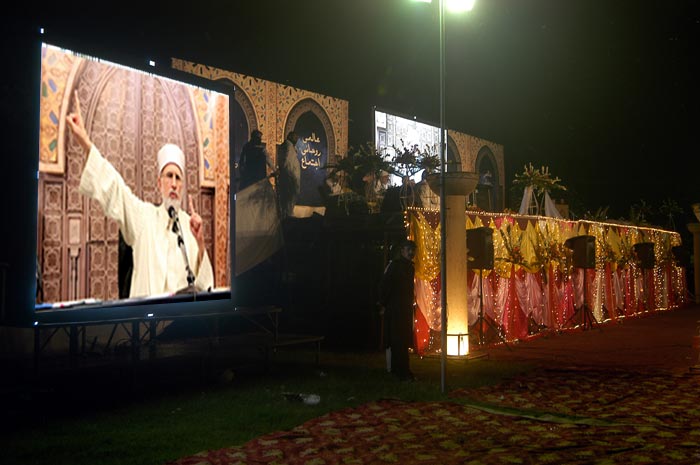 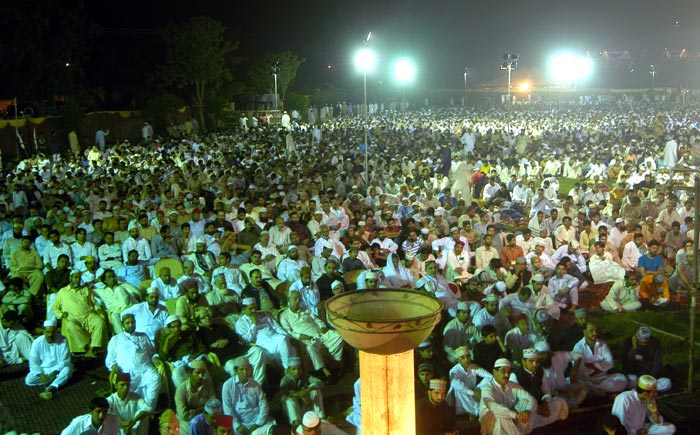 Dr Tahir-ul-Qadri said that democracy was a system, which allowed a select group of privileged elite to increase their perks and privileges to the detriment of collective interests of 98% of people. For last fifty years, a big fraud was played with the people of Pakistan in the name of democracy. If the current electoral system was not changed, even the conduct of hundreds of elections would fail to produce any tangible solution and a capable leadership to steer the ship of this state out of unchartered waters.

The participants of the congregation who came in their hundreds of thousands from across the country were carrying placards and banners with different slogans written on them. People chanted slogans against the current electoral system and in favour of return of Dr Tahir-ul-Qadri to save the country from an impending precipice.

Dr Muhammad Tahir-ul-Qadri said that the interests of Pakistan were being compromised in the name of politics. He said that politics and elections in Pakistan were two sides of the same coin, which were a deceit and a fraud. 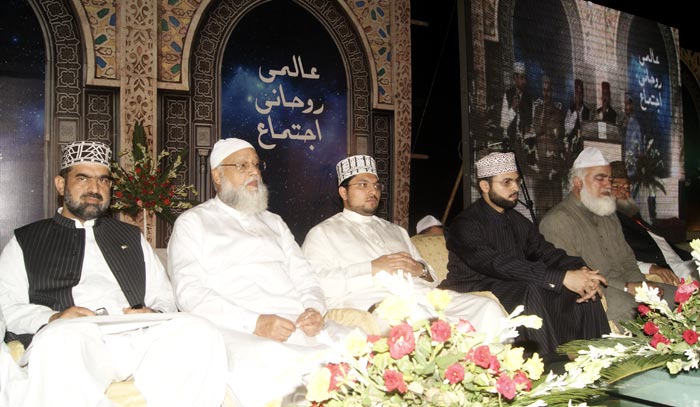 In reply to people’s slogans, Dr Tahir-ul-Qadri said that he respected people’s sentiments and his heart bled to see the terminal crises the country was stuck up in. He said that the Pakistani society was increasingly becoming a society of the beasts and the people have been left to thirst for even basic necessities of life. The violation of their life, property and honour has become a norm. He said that the youths were getting disenchanted with their future with the result that they were being robbed of patriotism. The people have been forced to think as to why Pakistan was attained if they were to live such a miserable life, he maintained.

Dr Muhammad Tahir-ul-Qadri said that the current political system allowed predatory elite of a few hundred families to bleed the majority of its people to death by monopolizing its resources and concentrating political powers in their hands. He said that it was in this context that elections without change of system would be tantamount to putting people into dig of destruction and annihilation.

Dr Muhammad Tahir-ul-Qadri said that every individual needed to play his role for change in the country. He said that the nation needed to rise up and protect their sovereignty as the country’s independence was being sold.

Shaykh-ul-Islam recited Surah # 82 and 83 of Surah Ikhlas. He said that the 27th of Ramadan was the night of Allah’s friends in which He blesses His servants. It is night of sincerity. Dilating upon meaning of sincerity (Iklhas), he said that sincerity is when a servant says that Allah Almighty is his Lord, then, he should comply with His commands both internally as well as externally.

Shaykh-ul-Islam said that today our hearts have not been enlightened with the light of sincerity. The hearts in the present age, he said, are attracted towards everything that deviates one from the path of Allah Almighty. He said that world has everything that can keep heart busy in temporal attractions. 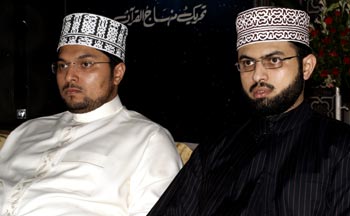 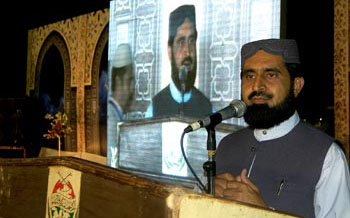 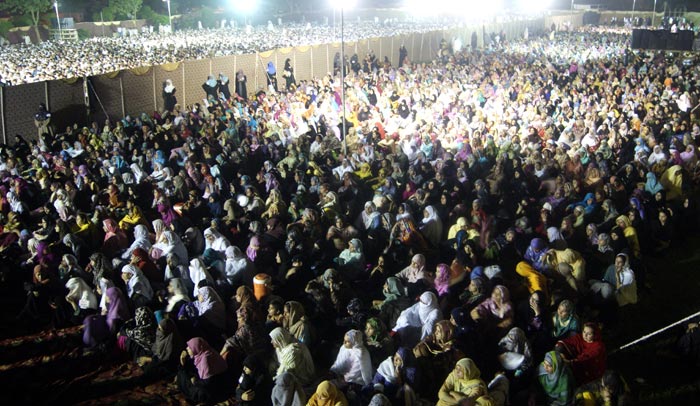 Shaykh-ul-Islam quoted Hadith-e-Qusdi wherein Allah Almighty said: O people! I am a very good partner. If anyone performed any pious deed for Me and then included others in one’s intentions viz. he polluted his intention with worldly pursuits i.e. the people should regard him as pious, I separate Myself from him. Neither do I have anything to do with his deed nor that deed has anything to do with Me.

Dr Muhammad Tahir-ul-Qadri said that when such situation is created, sayings of man become the sayings of Almighty Lord. He asked the people to focus on life after death as this world was too fleeting to be taken seriously.

Shaykh-ul-Islam said that today we have been lost in the worldly attractions and do not know that there are other tastes that lie beyond materialism. 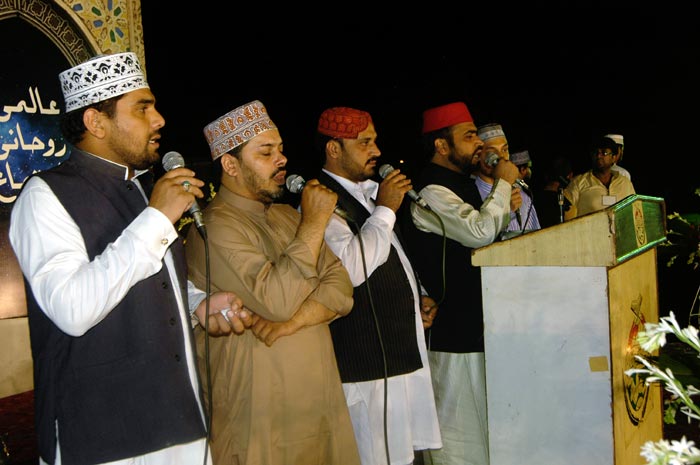 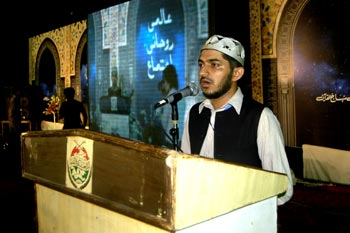 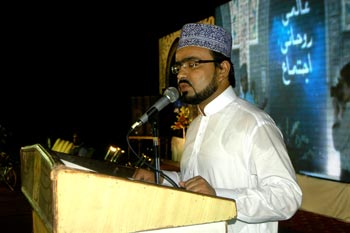 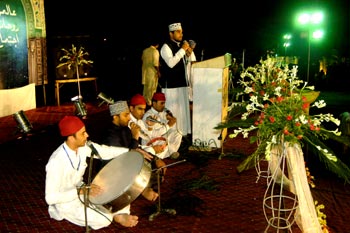 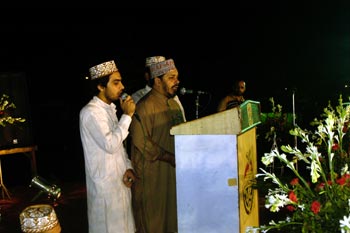 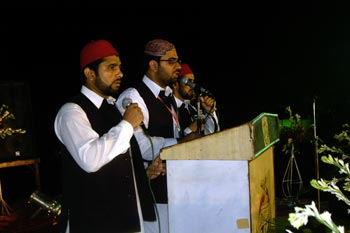 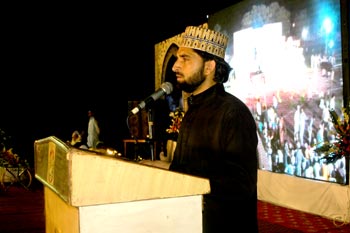 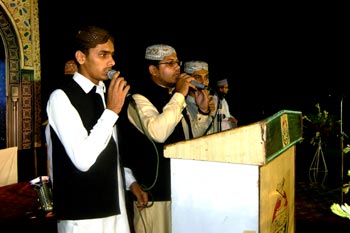 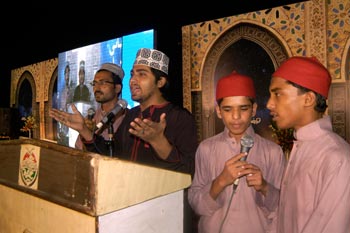 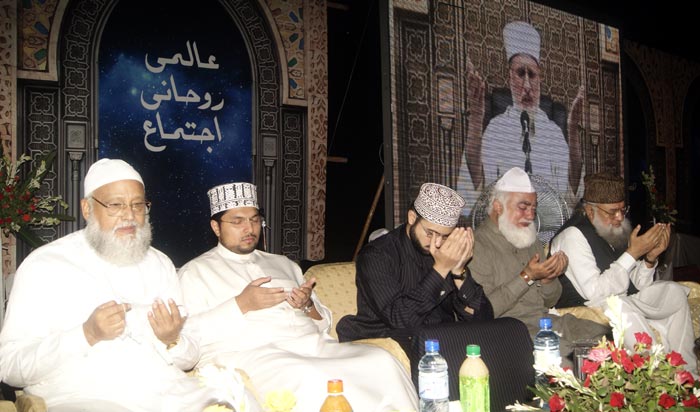 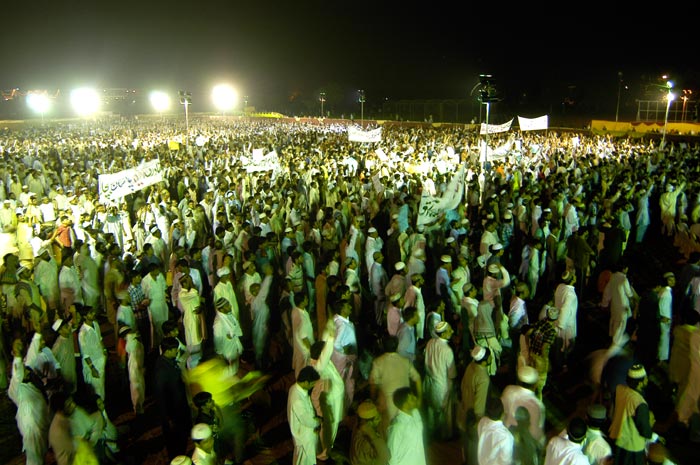 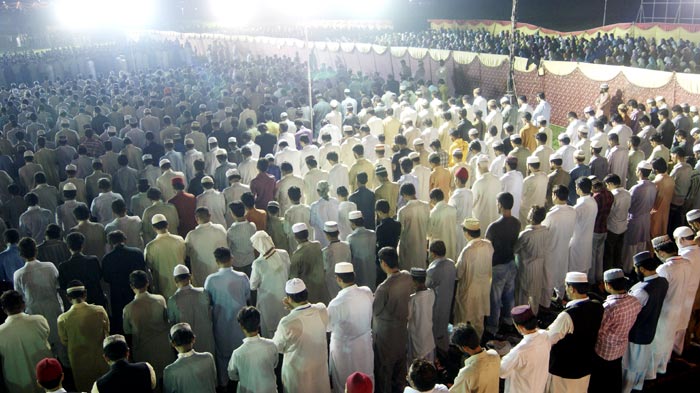 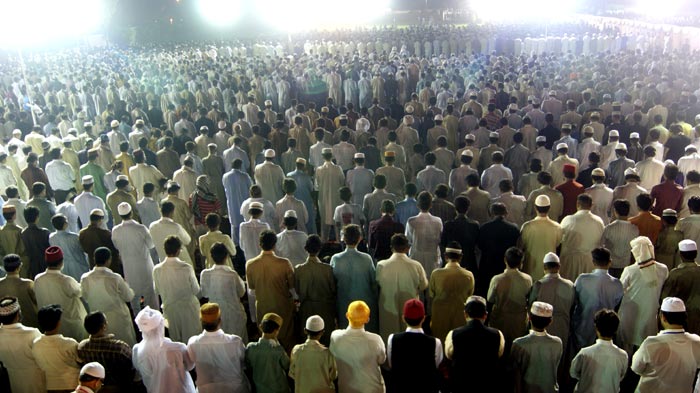