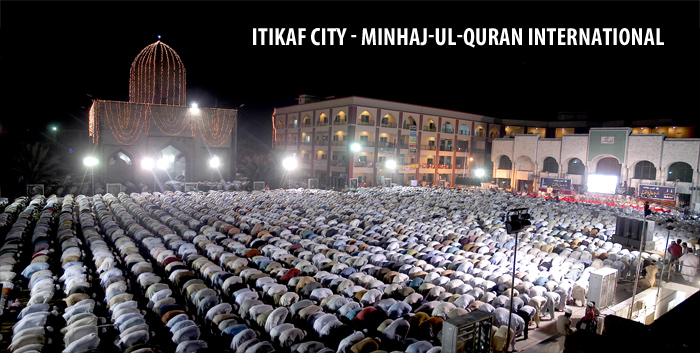 All is set for Minhaj-ul-Quran International’s Itikaf City to be established from tomorrow (Tuesday) onwards in Jamia al-Minhaj, Township, Lahore. Thousands of men and women from across the country will become the residents of Itikaf City from the 20th of Ramadan till sighting of moon in the company of Shaykh-ul-Islam Dr Muhammad Tahir-ul-Qadri. Hundreds of people have started to arrive from abroad to take part in the Itikaf.

The last meeting of over 100 administrative committees was held in the Itikaf City in Township under the chairmanship of Sheikh Zahid Fayyaz on Sunday in which Secretary Itikaf Jawad Hamid gave a detailed briefing regarding preparations of the mega event. He particularly briefed the meeting about arrangements to ensure smooth and uninterrupted supply of water and electricity and steps taken to take care of hot and humid weather including provision of ‘sehri and iftar’ on time.

Amjad Shah, Director of Minhaj Welfare Foundation, informed the meeting about availability of medical facilities during the ten days of Itikaf. He told the participants that teams of doctors as well as ambulances would remain available round the clock during Itikaf.

Sheikh Zahid Fayyaz gave instructions to the concerned committees regarding smooth performance of rituals, fool-proof security arrangements and division of Itikaf City into different blocks for effective administration as well as facilitations of the residents. He said that Shaykh-ul-Islam Dr Muhammad Tahir-ul-Qadri would address the participants of the Itikaf City for ten days after Isha prayers. His lectures on the Holy Quran and Spiritualism will continue till Sahri. The residents of Itikaf City will rest after Fajr prayers followed by performance of individual and collective worships. He told that a large number of women would also attend Itikaf for whom arrangements have been completed.