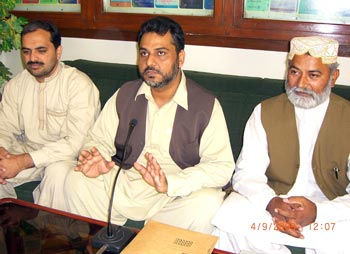 Addressing a press briefing about the arrangements for the upcoming Itikaf 2009 to be held under the banner of Minhaj-ul-Quran International, Sheikh Zahid Fayyaz; senior naib Nazim-e-Ala of MQI and the head of the central Itikaf Committee, said that thousands of people from across Pakistan and abroad, both male and female, would participate in the collective Itikaf during the last ten days of the holy month of Ramadan. He said that the Itikaf city of MQI is the second largest gathering in the entire Islamic world after Harmain Sharifain. He said that the hundreds of participants would take part in the Itikaf from abroad and they have started to arrive. The Directorate of Foreign Affairs of MQI has made special arrangements for their lodging and food in this regard.

Senior naib Nazim-e-Ala told the media men that elaborate arrangements were in place for the participants. In addition to the provision of official security, more than 2000 youth of MYL and MSM would also discharge the security duties. Separate arrangements have also been made for the female participants, where 17 blocks have been put in place. A team of 50 doctors would be present round the clock to cater to any medical need and the seven ambulances would also be available for any emergency.

Sheikh Zahid Fayyaz said that public utilities like PHA, WAPDA, WASA, Police, and district administration have always extended their cooperation to make the Itikaf city a success. He hoped that these bodies would continue to provide their help for this year’s Itikaf as well.

He said that elaborate arrangements for the cooking of food have been made where the cooking would be done in two shifts with more than 300 people working there.

He told the journalists that 63 sub-committees were also working under the command of the central committee to look after various arrangements where their preparations were in the last stages. He told that arrangements were also in place to show the keynote speech of Shaykh-ul-Islam Dr Muhammad Tahir-ul-Qadri on huge LCD screens. Stalls of his CDs, DVDs and books would also be put up and special concession would be given to the participants of the Itikaf city.

Sheikh Zahid Fayyaz said that MQI was also organizing Itikaf at the district levels where thousands of people would participate in it and arrangements were being made to show the speech of Shaykh-ul-Islam on huge LCD screens. Amir-e-Punjab Ahmad Nawaz Anjum and Jawad Hamid were also present on the occasion.